photo: Lilja Lehmuskallio
HAFED COLLAGE OF DIFFERENCES AND FRAGILITY
Hafed is a longtime friend of mine. He was born in Algeria and lives paperless in Paris. I’ve had the privilege to follow his life from close.
This stage reality is an effort to perceive solely Hafed’s corporeality.
When I was working on this piece, I realized it was impossible to make a representation of Hafed’s life, because the reality he lives in is so strange and composed of such mutually contradicting elements that it can’t be captured in a sole representation.
That is the reason this stage reality is a collage on one hand of differences, on the other of fragility that connects people.
When starting this work I posed two questions to the working group.
Working in the rehearsal period was based in these questions and we work with them in the performance. The questions are:
Who and where am I?
How do I perceive my body and my sexuality?
– Sanna Kekäläinen 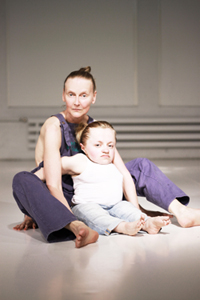 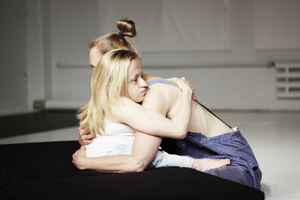